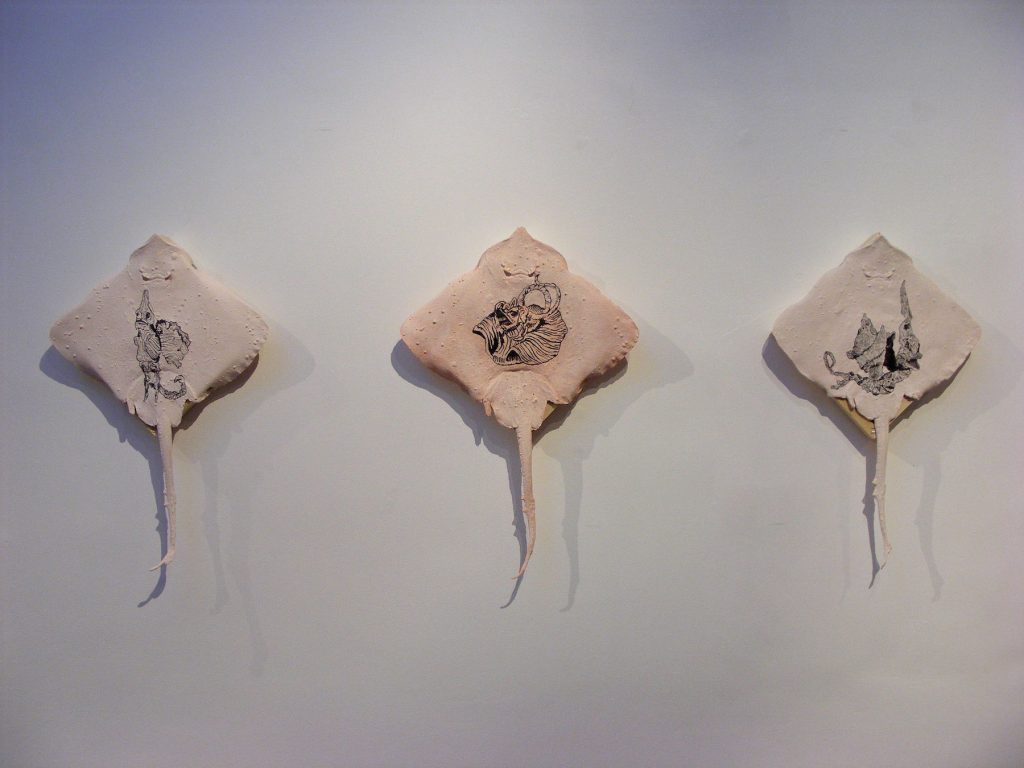 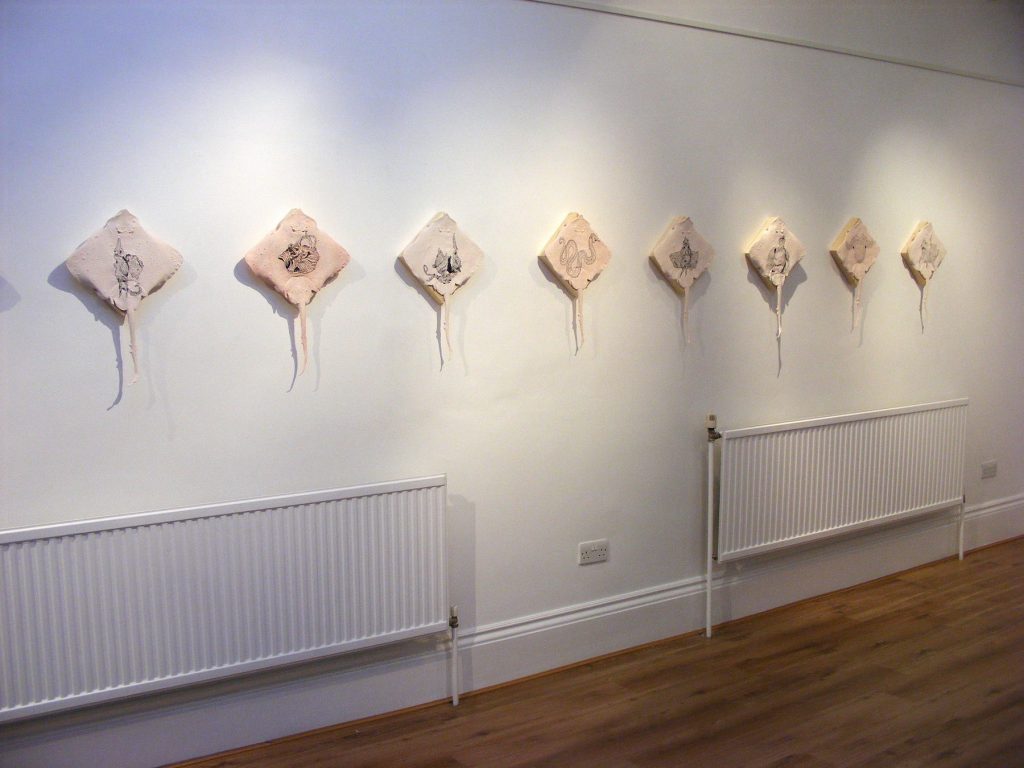 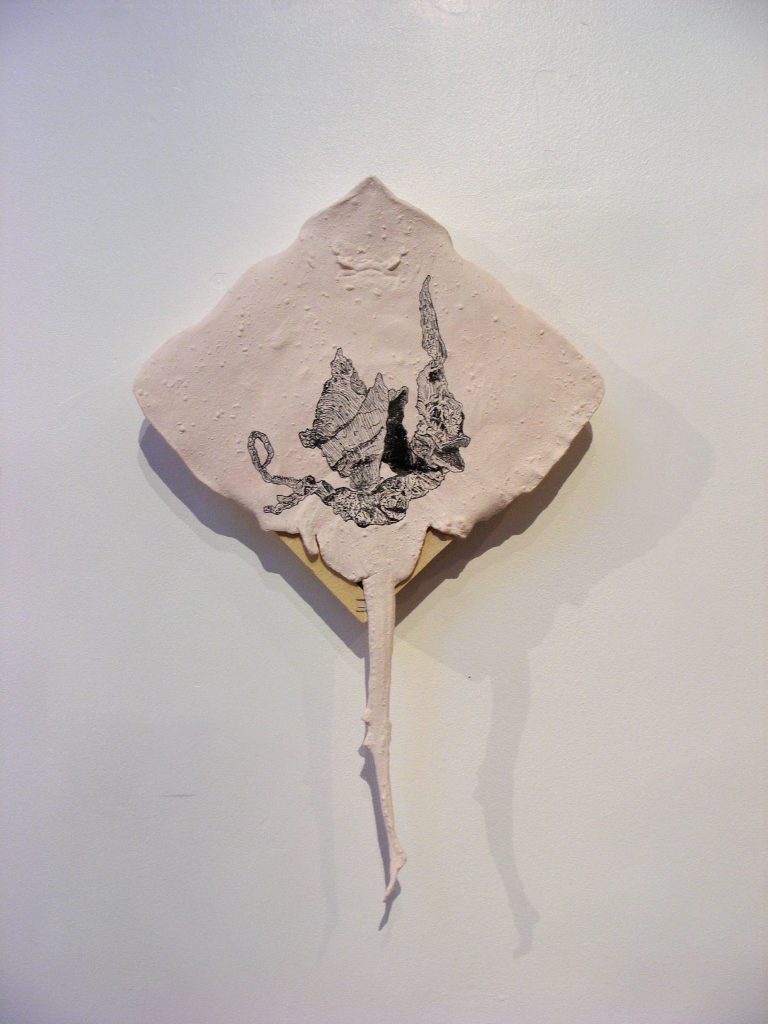 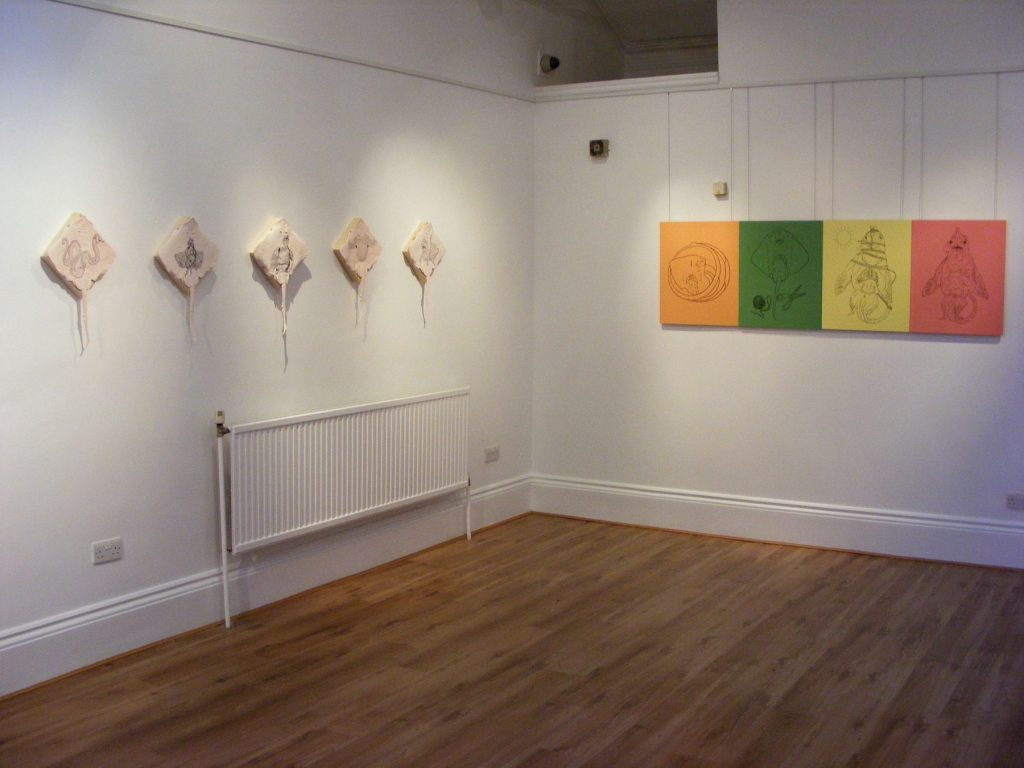 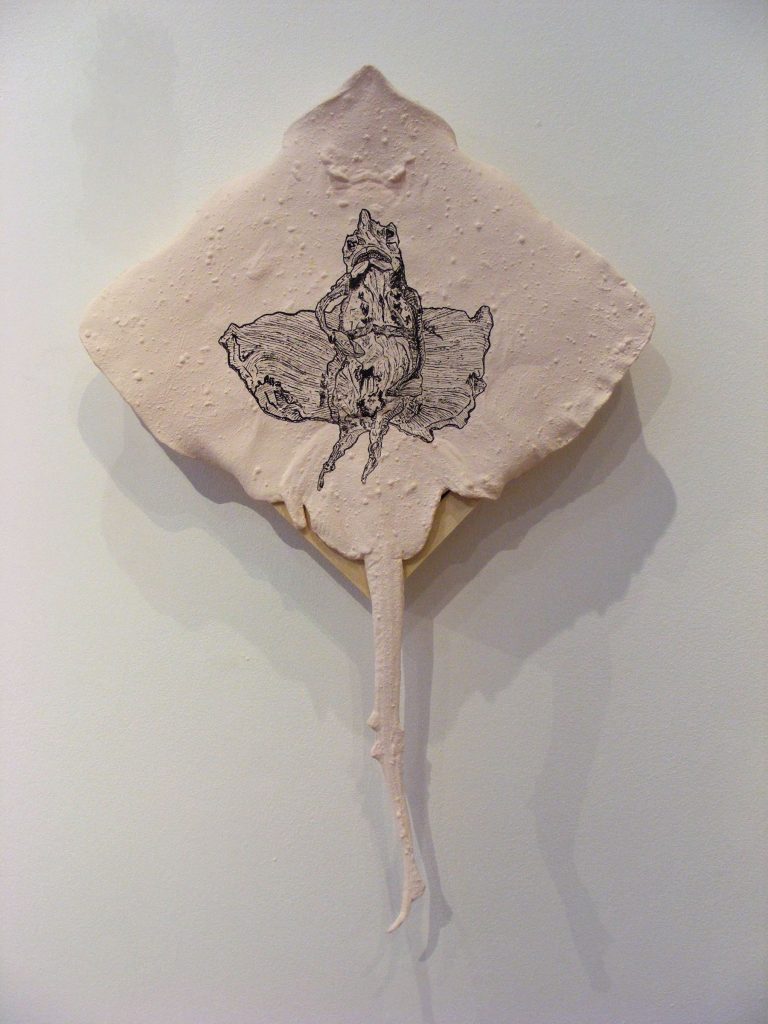 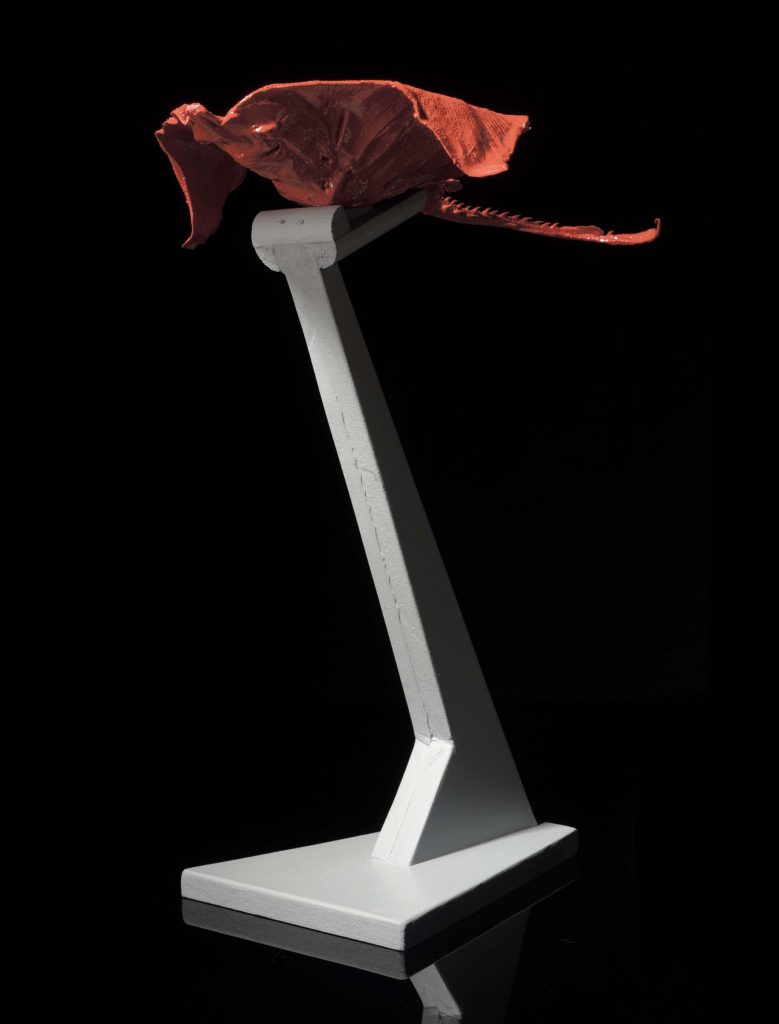 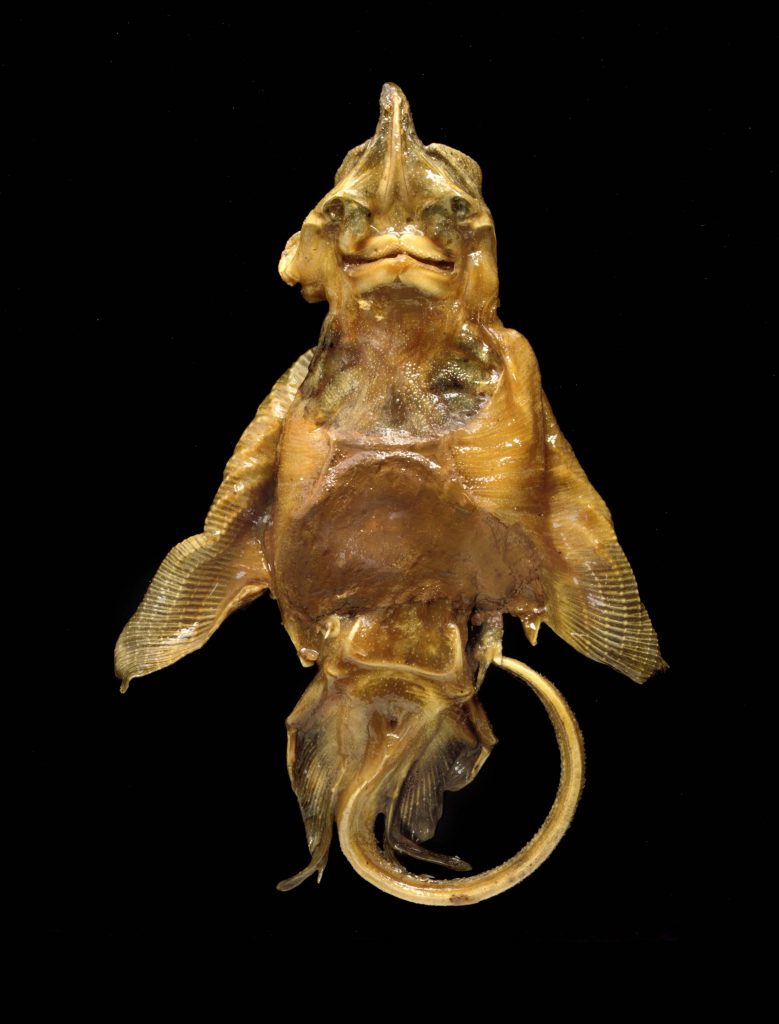 Tom Van Herrewege’s new series of works are an exploration into the process of creating Jenny Haniver’s. A Jenny Haniver is a dried out Skate or Ray that has been folded, cut, strung together and left to dry. It then shrivels into the form of a peculiar demon-like character. The craft is an old sailor’s trick that was used to profit from naïve tourists.

The distinguishing features are caused by the sun forcing the skin and flesh to tightly accentuate the animal’s nostrils and mouth, thus creating a prominent ‘devil face’ that appears to be grinning. The sixteenth century Naturalists Ulysses Aldrovandi and Conrad Gesner chose to draw and describe these fantastical beasts within their work and claimed that the creatures actually existed.

Van Herrewege’s practice for the last few years has involved working with taxidermy as a primary sculptural medium in exploring animal subjects form and how we perceive them. Using that platform, creating Jenny Haniver’s and learning the nature of this botch taxidermy process is something the he has chosen to investigate further.

The artist has interpreted this act as similar to Animal Origami and is intrigued by how this brutal and simple process has been repeated on coastlines worldwide for hundreds of years. The sailor’s desire to whittle the Skates and Rays time and time again in such a fashion becomes a reaction to their flat diamond like form through passed on knowledge. And although Jenny Haniver’s (Jeune de Anvers to the French speaking and Garadiabolo’s to the Spanish) are created to be sold as novelty curios, they also demonstrate a contrived transformation of physically altering an animal to artefact.

Within this study the ancient process of creating Jenny Haniver’s is examined through drawing, sculpture and film. Tom has created a series of ten latex Rays stretched in a manner that refers to the language of traditional oil painting. Each individual work acts as a motif for the animal that is continuously repeated spanning the entire wall. There are ink drawings on some depicting Jenny Hanivers previously made by various craftsman so that your eye is drawn from the motif to its possible metamorphosis. Others display copies of Aldrovandi and Gesner’s original drawings of the creature to reveal how they were perceived throughout history.

There is a film piece that shows the artist performing a demonstration of how to create a paper aeroplane form using a dead Skate on a cliff top in south east England. The film shows Van Herrewege’s own taxidermic process of making such an artefact in a delivery that mimics educational television programmes such as ‘Blue Peter’. The viewer can watch and learn from this bizarre and quite savage process but the work also highlights the absurdity of the act of Animal Origami and its reasoning. The artist is demonstrating a procedure to an audience that supposedly anticipates the critical moment being ‘here is one I made earlier’. The soundtrack to the film was made by a music producer in collaboration with the artist to echo the individual stages and actions as the process develops.

The exhibition also includes a selection of drawings and photographs that describe the developments and research methods within the project.